Just the news we were all waiting for… 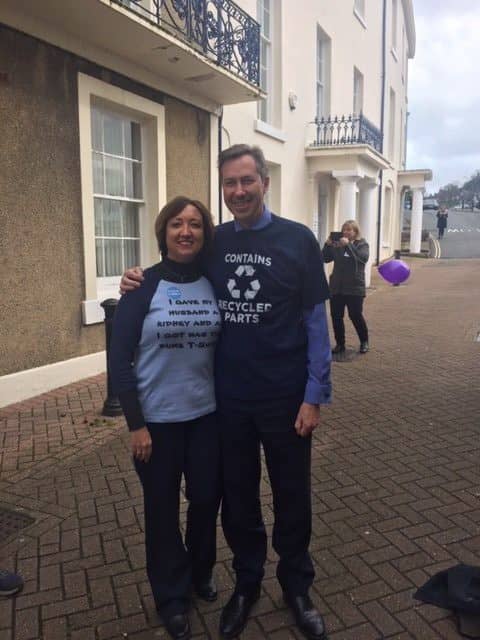 Hundreds of lives will be saved after a change in organ donation laws.

It is just the news for which South Devon couple Chris and Liz Hart had been hoping after they spearheaded a campaign locally.

Torbay MP Kevin Foster has also welcomed the Royal Assent for the Organ Donation (Deemed Consent) Bill. It has now become an Act of Parliament.

The Bill will allow for consent to organ donation in England to be deemed to have been given by a potential adult organ donor before their death unless they have stated they did not wish to be a donor or an exception applies. Previously people had to ‘opt in’ if they wished to donate. Now they must ‘opt out’ if they don’t wish to.

Liz donated a life-saving kidney to husband Chris in operations just before Christmas. They are both recovering well and are back working at Devon law firm Wollens where Chris is chief executive.

They spoke publicly about their ‘inspiring’ story for the first time to promote and support World Kidney Day on March 14.  Staff from their five offices across Devon also staged sponsored walks on the special kidney disease awareness day.  A Just Giving page was also set up for on-line donations with more than £1,200 expected to be raised overall for kidney research. The walks came just 24 hours before news of the Bill’s Royal Assent.

Chris said: “This is excellent news. The timing could not have been better – just 24 hours after World Kidney Day and the sponsored walk by staff at our Wollens offices to raise money for kidney research. That was a big success and Liz and I would like to thank everybody who took part or who have donated. We hope to have raised more than £1,200 once all the money comes in which is a great effort.

“The Bill will make such a huge difference and will change – and save – people’s lives.

“However, the message should still be that people must make their organ donation wishes crystal clear to their families or next of kin to make sure there is no element of doubt.”

Chris praised Torbay MP Mr Foster for his support for the Bill.

He has backed it several times in the Commons and was on the Bill Committee which got it through Parliament.

Mr Foster said: “This will make more organs available and down the line it will make what can a be a very difficult time slightly easier for relatives. They will not have that active decision to make.

“It will give people their life back. This will mean that in years to come there will be people alive in Torbay who may not have been if this Bill had not been passed.”

He said of Chris and Liz Hart: “Their story is inspiring. Liz has given Chris the ultimate gift – the gift of life.”

The new legislation is to be called Max and Keira’s Law after a national campaign. Eleven-year-old Max Johnson’s life was saved after the parents of nine-year-old crash victim Keira Ball agreed to donate her heart to him in 2017. The Laws live in Barnstaple.

The Just Giving donations page is still running. The Harts kept family, friends and staff up to date with their recovery, naming Chris’s new kidney Sidney. Hence the name for the donation page which can be found here: https://www.justgiving.com/fundraising/wmsidneythekidney