One year on and Wollens are staging a special fund-raising night for a charity which is ‘close to their heart’. 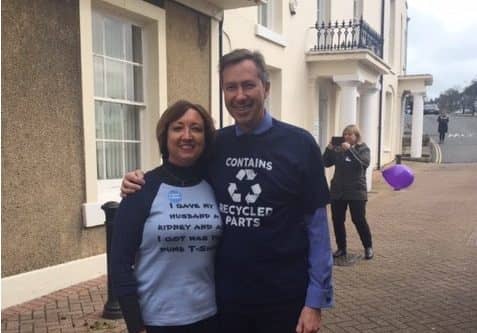 It was exactly one year ago that Wollens’ chief executive Chris Hart was given the gift of life by wife Liz who donated a kidney to him in a transplant operation.

The Harts were back at their desks within months, but ever since that life-saving day they and their staff have been keen to say a big thank you by raising money for Kidney Research UK.

Organised by Liz, the staff from Wollens’ five offices in Torquay, Exeter, Barnstaple, Newton Abbot and Dartmouth took to the streets for sponsored walks for World Kidney Day in March 2019. Partner Jon Dunkley, who is based in their Barnstaple office, also successfully completed a gruelling rally expedition which took him through eight European countries in just eight days.The 2,000-mile trek was all part of the Monte Carlo Fireball Rally through France, Monaco, Italy, Lichtenstein, Austria, Germany, Luxembourg and Belgium with Jon raising hundreds of pounds for the charity.

Wollens have decided to partner the charity in the coming months with a series of fund-raising events, including a quiz night next month and golf day in 2020.

The curtain-raiser will be the quiz night which is being held on Wednesday December 4.

The venue will be celeb chef Mitch Tonks’ recently-opened Rockfish Seafood Restaurant on The Quay in Exeter.

The host for the night will be the well-known former Exeter Chiefs rugby star and sales guru Chris Bentley.

Wollens chief executive Chris says: “Since the transplant a year ago Liz and I have been overwhelmed at the willingness of others to help support efforts to raise fund for the much needed research into kidney disease, and illness that currently affects 3 million people in the UK.  Wollens is delighted to be working as a charity partner with Kidney Research and look forward to the fun events ahead !”

A spokesman for Kidney Research UK said: “We’re excited that Wollens have chosen Kidney Research UK as its new charity partner. By World Kidney Day in March, Chris and Liz took on the mammoth task of a sponsored walk with staff from Wollens’ offices, raising money to help us fund more research into kidney disease. This was where the idea and passion for fundraising began. We are looking forward to working with them.”

Rockfish boss Mitch Tonks was delighted to play a part and host the evening. He is said: “It’s a real pleasure to support this fun evening organised by Wollens for a fabulous cause.

“I know Chris and Liz have inspired this and what a truly magnificent story they have to tell to assist others.”

Wollens are looking for 20 teams of four to take part in the quiz. Entry per team costs £150 which includes a sumptuous meal for all 4 team members.

Chris says: “We are really pleased to be working with Kidney Research UK for the coming year in support of this fantastic charity which is, of course, is very close to our hearts here at Wollens.

“Our first fund-raising event will be the quiz night. As well as the charity element, this is also a great opportunity to network with our business partners and clients in a very relaxed and informal environment. We are hoping to attract teams from across the region.”

Entries have already started to come in. All you need to do to enter is register here :  https://www.eventbrite.co.uk/e/wollens-charity-quiz-night-teams-of-4-people-tickets-76879158633